I quite often have the conversation with other people about lords and lady’s (Arum maculatum) generally I love the chats as it nearly always ends up with a new common name being learned as it seems to have a multitude of regional names ,and then inevitably the fact that most people as a child are told its poisonous my favourite story has to be that the fruit spike of the plant is snake food and the berries are where the snakes poison comes from .

Now most literature I’ve read actively lists the plant as poisonous unless processed in the correct way but also warns that if not processed correctly it can be extremely poisonous ,
The reasoning behind this is that all parts of the plant contain calcium oxalate crystals which can cause extreme irritation to the skin causing problems with your respiratory system and I can personally tell you raw even the tinniest piece is quite unpleasant if placed in the mouth and this happens almost immediately and nothing seems to dull the effect other than time , it’s like having your tongue tattooed and I seriously suggest not attempting to try this at all.
So you may ask why would I want to eat this ,well the truth is there are many people who have processed the roots in various different ways for food but I can’t find any reference to taste , leaving me with the questions is this something I want in my diet ?? Was it ever used as a root vegetable ?? and which way is going to give me the best result ??

So the poisonous ingredient of the arum Lilly is calcium oxalate, this is the compound that causes kidney stones in humans . There are many counts of poisoning from ingestion of plants containing calcium oxalate but it is very unusual for this to lead to death don’t get me wrong it’s very unpleasant and does have the means to kill or even permanently damage your kidneys so not something to take lightly .

So I’ve read about three scientific proven ways to neutralise the calcium oxalate crystals found within the tubers of the arum Lilly the first and most common is slow roasting as you would a potato or indeed any other roasted root
As I didn’t want to hinder the taste in any way I have decided to add a small amount of oil and place the root in the embers caked in clay and then I left this for a good few hours to cook thoroughly .
The second way is cold leaching now it is believed that the method used in history would have been to grate the root and then leach , this was pretty fiddly and I found simply crushing the root gave me a similar constancy, this is then placed in tepid water and left for a few hours and the the water is drained and the process is repeated over the course of a day .
The third method is traditional leaching so grated and leached in flowing water in a suitable bag that is able to allow the flow of water to pass through the bag and contents I used a simple cotton bag
I’m not looking at a way to process the tuber to remove the calcium oxalate as these methods are proven already to do this ,I am simply trying to determine if this is a viable edible once processed and if it is nice to taste .

The first thing I noticed with the cold leaching was the cloudiness of the discarded liquid and it’s thickening reaction to it . And although the tubers are often likened to potatoes the alum tuber is not in the slightest like the potato in my opinion it is closer to a small Jerusalem artichoke ,it has a shinny skin with a polystyrene texture to the internals and when I tried to grate it I noticed a lot of ripping it does not resemble any root vegetable I’m familiar with .
I have read that in history they were processed to extract the starch for stiffening clothes .
I was wondering how the consistency would change after roasting as the leaching seemed to make a mulch rather than a solid .
After six changes of water the raw crushed pulp still created heat within my mouth so I tasted it with each further change until it lost that factor it took fourteen leaches in total and then lost its acidic/bitter taste but in all honesty lost any taste at all and resembled wallpaper paste so I’ve come to the conclusion that this method could be used to thicken stews and soup but without the knowledge of our calorific needs I doubt our ancestors would of gone to this level of effort to process the root in this way as it does not return a valuable return.
I did a simple taste test on the stream leached sample the obvious difference was the amount left had reduced with the constant flow of water and it has a more fibrous texture than the still leached sample but again lacked taste but had a slightly better form and fried as a patty was quite pleasant I will be using it to make a larger leaven bread type bake and think by adding other flavours this would of been a low input way of processing with a relatively good return.
The last was the roasted these worked well in the clay and the few that I added without protection just charred to inedibility so a protective layer was defiantly required I would think a hangi type oven would work very well , at first the smell was so much sweeter than I expected and had changed in consistency as the internal was light and fluffy but not at all fibrous or spongy , it has a taste like a cross between roast parsnip and swede ,sweet with a peppery hint and was extremely pleasant to both smell and taste I was without any reaction and I am sure this would of been the way the root would of been used as a staple if at all, I will use it in cooking in the future . 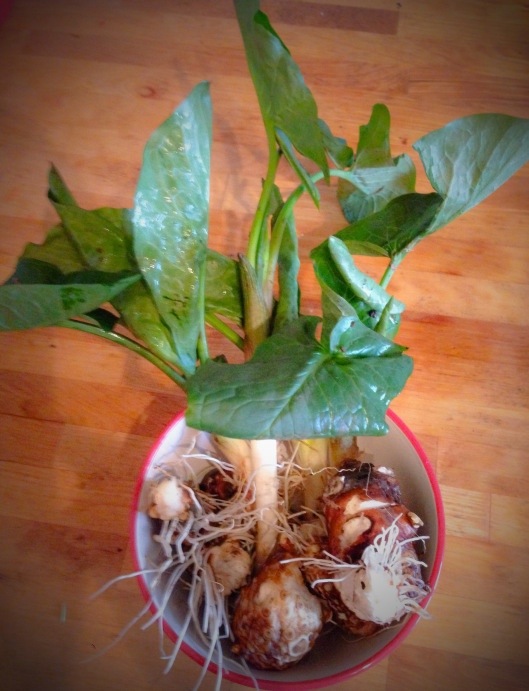